For those of you who’ve lived with me or traveled with me, you know the problem I have when it comes to unpacking. I don’t know if it’s a subconscious attachment thing, or if I’m simply lazy, but either way unpacking is rarely a priority for me. It seems like as soon as I landed here I hit the ground running. I had four days to figure out the city, get a permit of stay, find my school buildings scattered throughout Florence, and jump into my studies. And as soon as my first week of school started, it was over, and two of my roommates and I were getting ready to travel to the Amalfi Coast for the weekend. 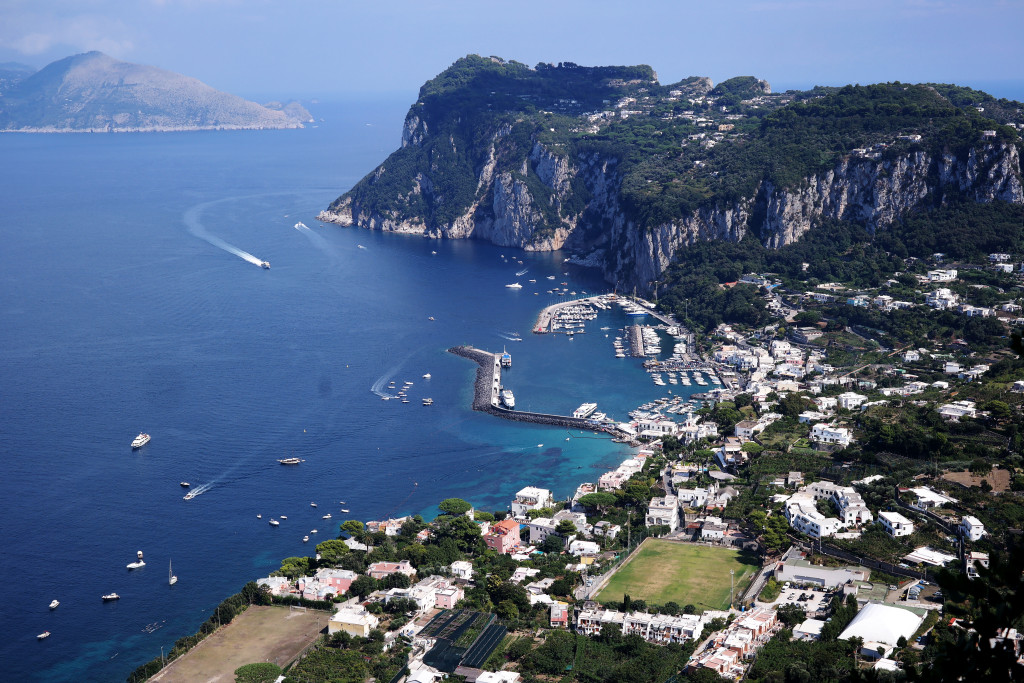 After an eight hour bus ride that should’ve been six, (the bus driver kept stopping for impromptu cigarette breaks) we arrived in Sorrento, Italy in the middle of the night and hustled into our hostel to get the most out of the two hours we were allotted to sleep before our day began. 6:45 A.M. came around a lot faster than any of us wanted it to, and we rolled out of bed to attend the hostel’s included breakfast. We scarfed down croissants smothered in Nutella, threw back our shots of espresso, and headed down to the port to board a ferry to Capri.

The ferry ride from Sorrento to Capri was nothing short of breathtaking. The water was a sparkling-turquoise blue, and even though the sun hadn’t come out from behind the clouds quite yet, it was still a spectacular day. When we reached Capri, we boarded a series of smaller boats for a boat-tour of the island. We learned about Emperor Tiberius, who once owned the entire island, and used it as his personal vacation spot. We marveled at the majestic rock formations and mocked the way they looked like peace-signs or a thumbs-up. We also passed through the natural arch of the famous Faraglioni rocks. 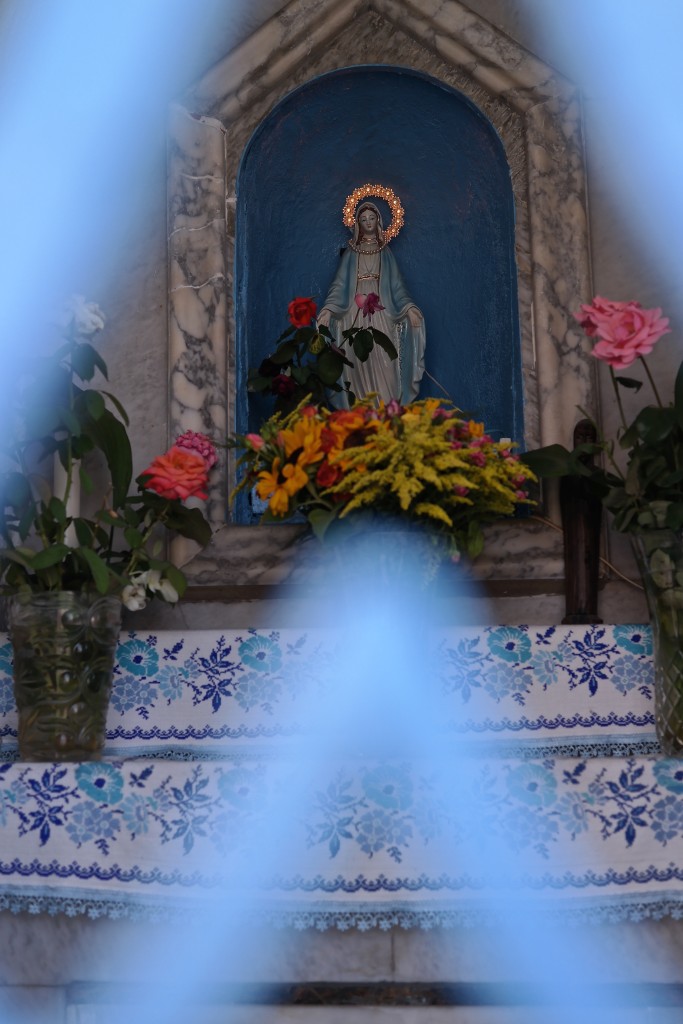 Near the end of the tour, the boat stopped at Grotto Azzurra, also known as the Blue Grotto. In the times of Emperor Tiberius, the grotto was used as his personal swimming pool, but in modern times the grotto is considered one of the seven wonders of the world (and was even featured in a Mariah Carey music video…not that anyone cares about that). From the outside, you would never know the wonder that awaits inside the grotto. All you see is a bunch of sweaty, old, Italian men in tiny rowboats clustered around an exceptionally small hole in the side of a massive rock formation. But, after said Italian men row you into the grotto, it’s definitely worth the 13 Euro. The dark cave is transformed by the iridescent water, which glows an astonishing blue color that I honestly can’t even put into words. The whole experience was truly amazing, and definitely the highlight of the boat tour.

When we finally got back on land at Marina Grande, we hiked all the way up to the top of Capri Town and sipped Granitas (like slushies but fruity and with a lot of alcohol) while we waited for a bus to take us to Anacapri. Anacapri was a short ten-minute bus ride away that honestly felt like a death trap. Italian bus drivers do not slow down regardless of whether or not we’re teetering on the edge of a legitimate cliff. At one point the girl sitting next to me noticed that we hit a lady who was walking across the street, but that the driver just honked at her and kept driving. Anacapri was full of more spectacular views and cute little restaurants. We had a quick limoncello and chocolate tasting at Carlo’s where I learned that I definitely do not like limoncello, and then we had the rest of the day to explore the island. Walking down from Anacapri to Marina Grande took about 45 minutes, but the views were unparalleled. You could see the entire island and the stretch of water that surrounded it. Even though the stone  stairs looked as though they were thousands of years old and might break off at any moment, the walk down was still enjoyable, and definitely worth it. 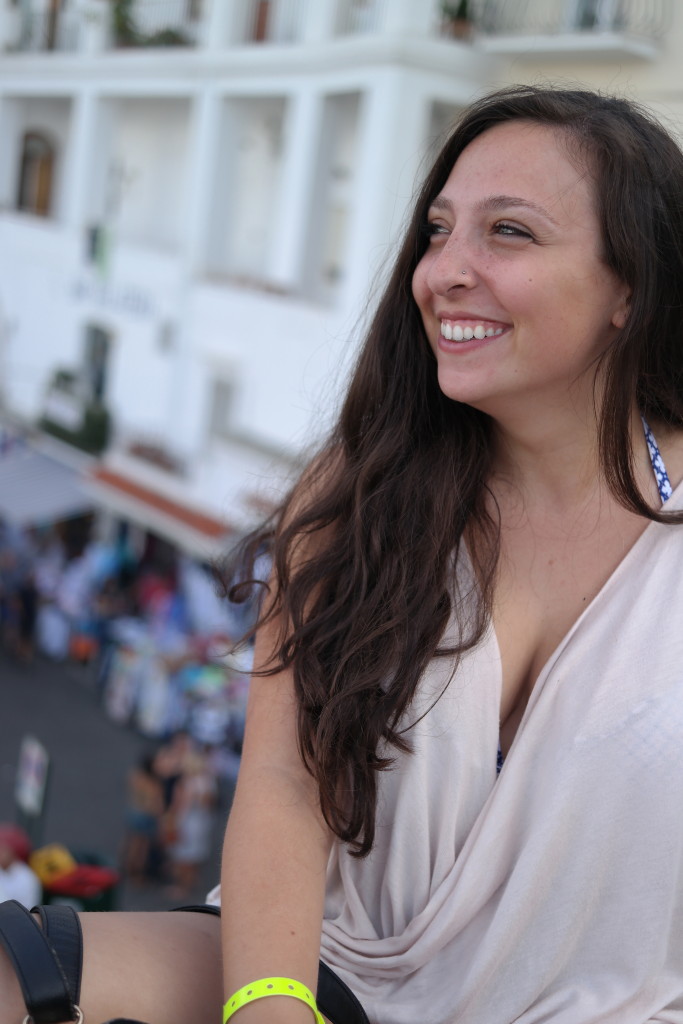 The next day, we spent an entire day lounging on the black sand beaches in Positano. My roommates and I each threw together 5 Euro to rent a boat and a driver to take us to a private beach about ten minutes away from Positano. When we reached the private beach, we saw a gaggle of local Italians and American tourists cliff jumping off the 50-foot rocks that lined the beach. The second I saw this my mind made an automatic judgement that I did not have the guts to do it. But, I thought about what an amazing experience it would be, and that I never knew if I’d ever be back in Positano with this opportunity again. Before I knew it, I found myself climbing barefoot up the side of this gigantic rock structure. I was truly impressed with my ability to not only climb the rock without a harness, but also not to think about how scared I really was. I was determined, and it felt good. When I got to the top, I was surrounded by girls shrieking about whether or not they wanted to jump. I knew that if I thought about it, and/or looked down I wouldn’t be able to do it, so I put my toes on the edge of the cliff took a deep breath, and jumped. 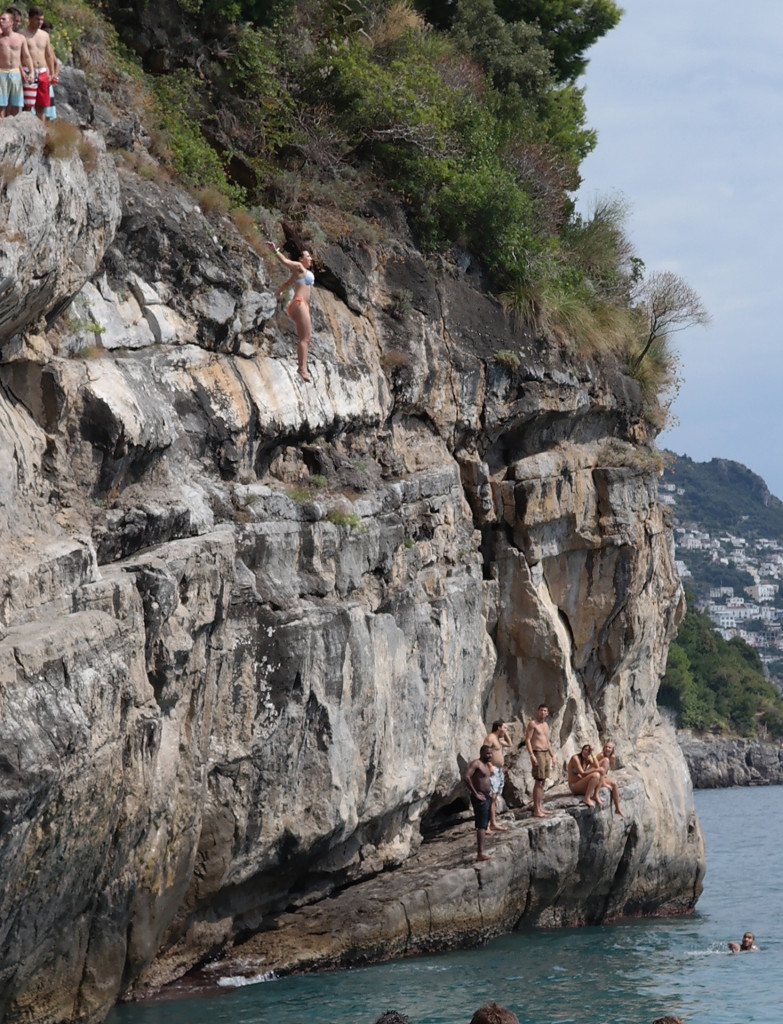 On Sunday we headed to Pompeii for a guided tour of the ruins. We learned about all the different buildings and rooms, and even saw the brothel which had restored paintings of the “menu”. At one point we hiked up to a part of the ruins that was still covered in ash from the last time Mount Vesuvius erupted, and looked out over the entirety of the ruins. It was truly a humbling experience, knowing that a whole civilization was destroyed, but that it was almost perfectly preserved due to a combination of natural events. The ash even mummified whole human bodies, which were on display in one of the museums. The range of emotions forever on their faces was spectacular and saddening. 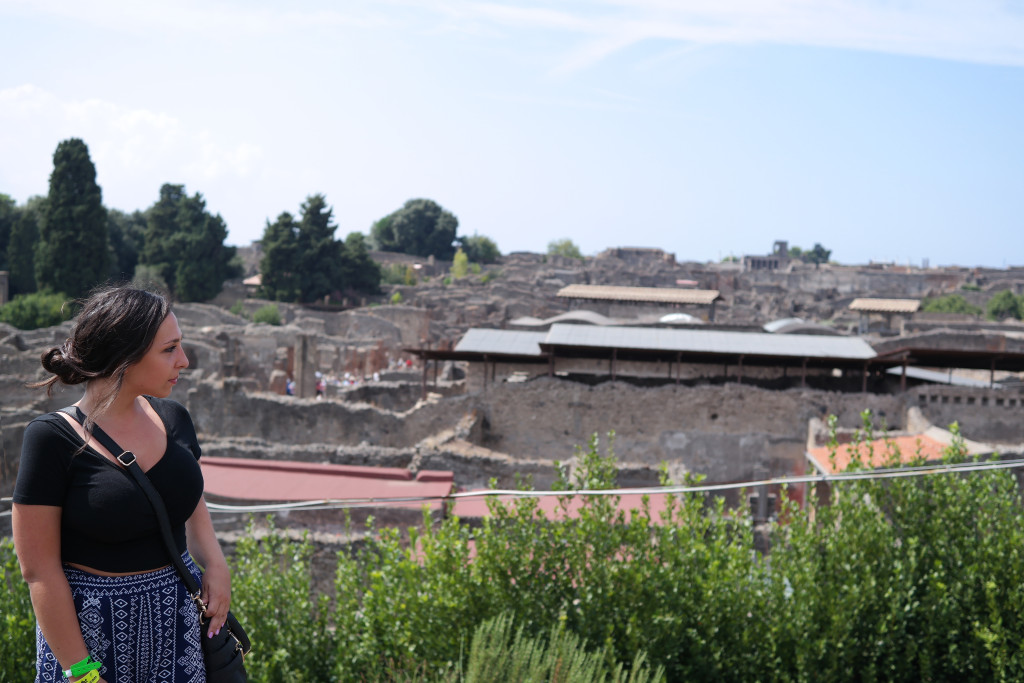 My trip to the Amalfi coast was the perfect first weekend in this country and an excellent start to my adventures. From hiking, to cliff jumping, to exploring ancient ruins, the weekend felt like an entire month. It was so amazing to be able to step back at the end of the trip and recognize how little of the world I’ve seen, and how determined I am to change that.

When we returned from our trip late Sunday night, I did something I’ve never done before; I unpacked. Right away. I took everything out of my puke-colored Swiss Army suitcase and hung it all up and put it all in my drawers. I moved in, and I now I’m here to stay.