Ever since I applied to study abroad last December, my life has felt like one very long, but very fast-paced dream. Days and months passed by so quickly, and before I knew it, the day of my flight to Florence had arrived. Naturally, I waited to pack until the very last minute, which in this case was the morning of my flight. I scrambled around my bedroom rummaging through still-full suitcases from my summer adventures trying to find all of my must-have items. By some miracle I managed to fit everything into a single suitcase which came out to just under the allotted fifty-pound maximum weight for luggage.

Ready for this long flight ✈️

Even after passing through airport security and squeezing through the narrow aisles into my seat on the plane, it still didn’t feel real. I turned on the tiny TV screen built into the seat in front of me and was delighted when I found The Devil Wears Prada as an in-flight entertainment option. I selected the movie and as the opening scene played out, I realized that I hadn’t packed a single piece of jewelry. This was only the beginning of the laundry list of items I had forgotten due to my last-minute packing tactic.

After watching The Devil Wears Prada, The Other Woman, and Tangled, I dozed off only to be woken up by the woman behind me shaking my seat and yelling at me in Arabic. I had no idea what she was saying, and when she finally realized it by the confused look on my face, she told me in very broken English that my seat was leaning back too far and that it was bothering her. At this point there was only about two hours left of the ten hour flight, but I still didn’t want to spend it with my seat completely upright. After trying to put it back multiple times only to have my seat shaken again I decided to suffer through the rest of the flight with my seat all the way up. 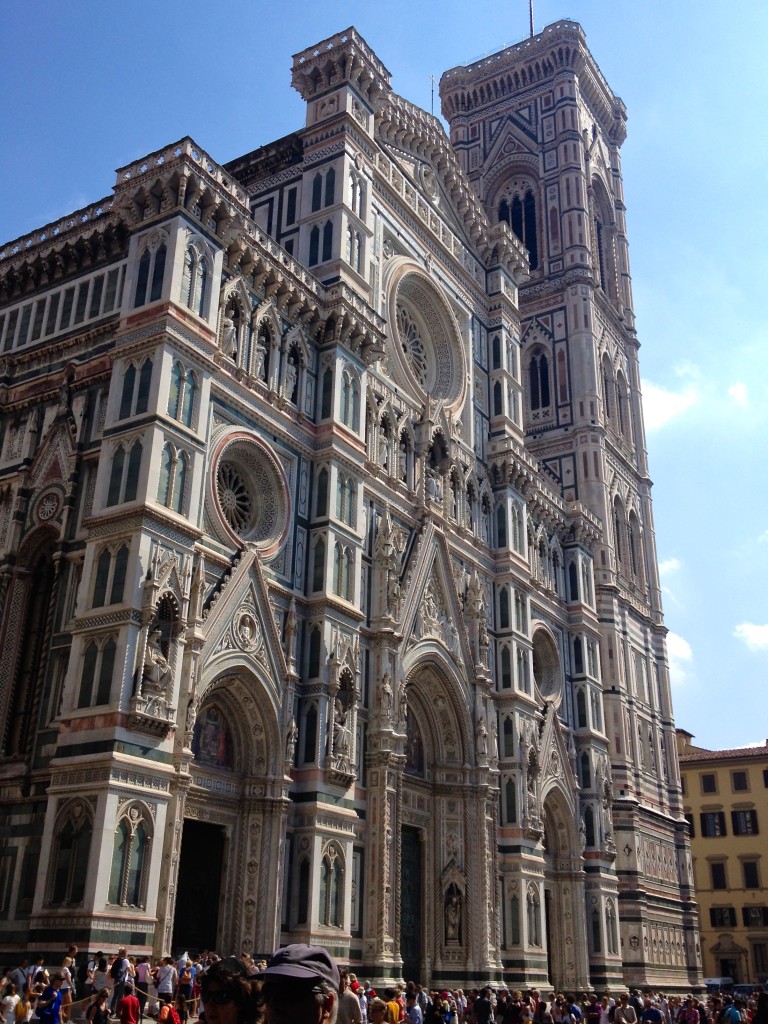 With all that drama behind me, I was looking forward to getting off the plane and boarding my next flight where I hoped I’d be able to recline my seat in peace, but the drama wasn’t over yet. Due to a monsoon-esque thunderstorm that had taken place before the plane took off, we arrived late to Frankfurt, and I had fifteen minutes between the time we landed and the take-off time of my flight to Florence. I ran frantically through the airport trying to find my gate, which naturally was at least a mile away. By the time I reached A50, the gates had closed and the flight to Florence was leaving without me. At this point I was dripping sweat, tired, and very hungry. I took a number and sat and waited to have my flight re-booked at the service counter. Two hours later, I boarded my flight from Frankfurt to Florence. This flight was already going much smoother than the last, and after a small glass of pinot grigio, I dozed off again as the clouds and the peaks of mountain tops passed by through the airplane window. An hour later, I woke up to the pilot speaking in German over the intercom. When he repeated himself in English he said that due to high-winds he couldn’t land the plane in Florence and was instead going to land it in Bologna. In my half-asleep haze, I didn’t pay much attention to what he was saying and fell back asleep.

When we arrived in Bologna, we were supposed to get our luggage and head to buses that were going to take us to the airport in Florence. Luggage carousels spun round and round, but my luggage still hadn’t appeared. I had been traveling for nearly 24 hours and hadn’t eaten in at least eight. My mind was foggy and my body was tired, and lost luggage was really the last thing I needed at this point. After what seemed like a lifetime, my puke-colored Swiss Army luggage finally appeared and I dragged it off the belt. I raced out to the buses to find an array of colorful coaches with no signs as to where they were headed. Luckily, I spotted a few people I recognized from my flight and followed the herd until we found a bright-red bus headed to Florence. I fell asleep almost as soon as we departed Bologna, but not before I noticed the Italian couples across from me cracking open boxed wine and filling up tiny plastic cups. I laughed to myself thinking what a bizarre sight that was before my eyes closed for the rest of the trip.

When we finally arrived at the airport in Florence, I found a couple of other girls waiting for a taxi to my school. We split the cab fare and finally checked-in and received our keys. The taxi dropped me off at my apartment and sped away. I opened the giant wooden door to a stairwell with checkered tile floors, and as the door closed behind me, I found myself alone in complete darkness with a fifty-pound suitcase to drag up what seemed like endless flights of stairs. My arms shook as I tried to balance my weight on each concrete step while carrying my backpack, my luggage, and using the flashlight app on my iPhone to see the next step in front of me. By the 5th set of stairs, I was dripping sweat and out of breath. I left my luggage in the stairwell to explore how much further I had to climb. When the staircase came to an end I found myself at another wooden door with an iron door-knocker. I had no idea if it was my apartment or not, but I knocked anyway. Luckily, it was my apartment (!!) and my new roommate was kind enough to help me carry my suitcase the rest of the way up the stairs.

The optical illusion flooring in the entrance of my Florentine apartment.

My apartment is so modern and beautiful. I was shocked by the clean metal fixtures and the endless amount of natural light that floods in through the sky lights. I feel so lucky to have the chance to live in this amazing city, but even luckier to experience living with locals in a comfortable apartment not too far from the city center. I couldn’t have asked for a better place to live during time in Florence, and I am so excited to see all the amazing things Italy has to offer.

Even after living here for almost a whole week, it all still seems like a dream. My goal for the semester is to be present as often as possible and really take in my surroundings at all times. I hope by the time I’m on the plane ride home, I’ll doze off feeling like I’ve been awake and alive for the past four months, and that I’ll spend the rest of my life dreaming about when I’ll return.