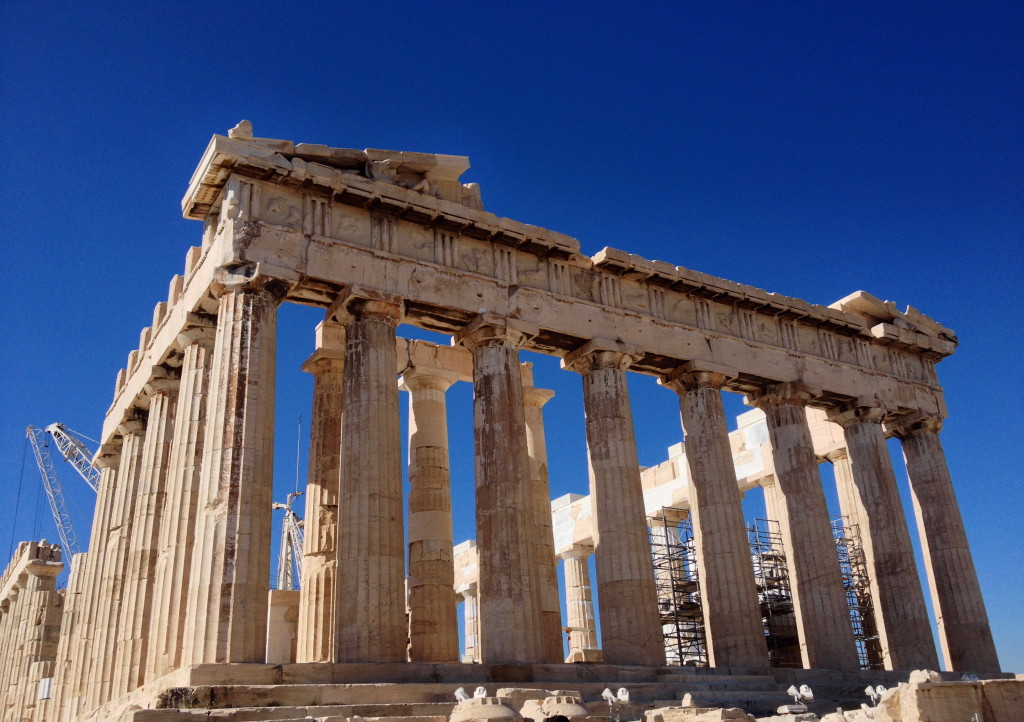 Last semester, I took an Art History course titled Greek and Roman Art and Archaeology. I fell in love with the monuments, the statues, and the beautiful pigments used to color these spectacular works. When I decided to study abroad, I knew Greece was the number one place on my must see list. Even though I dreamed of standing in front of ancient temples admiring them as I had on the lecture screen, I never thought that it would actually be a possibility. 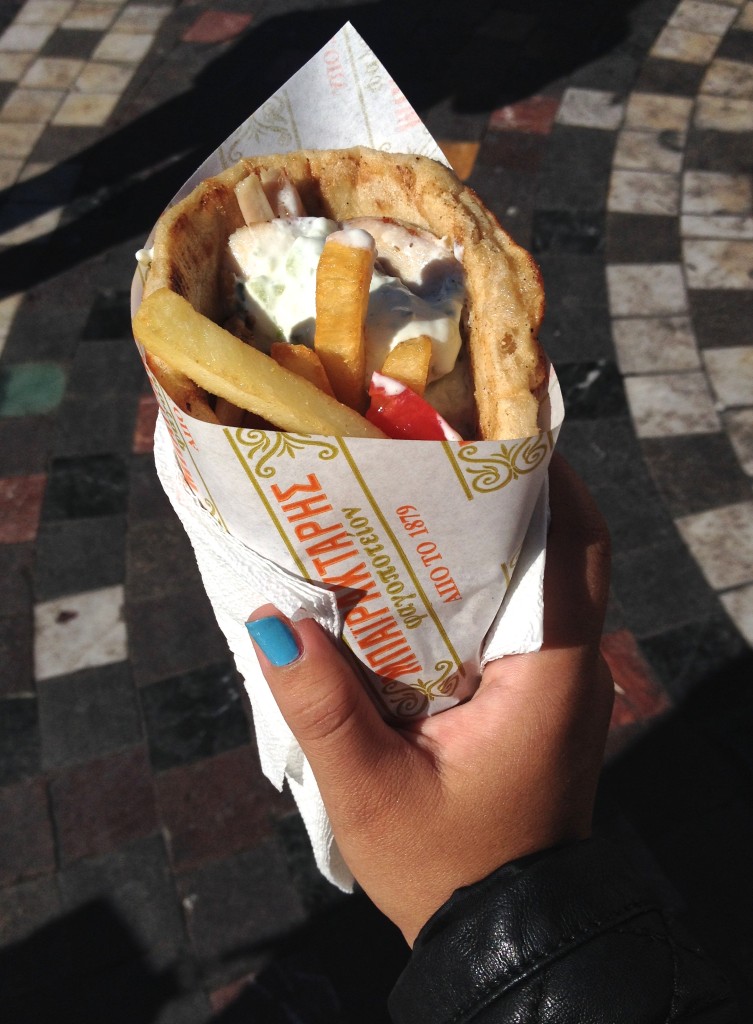 When I arrived in Italy, my roommate and I had agreed to try to make Greece our 10-day Fall Break trip. After a lot of planning, it was all set up and even though it was only two months away at the time, it was one of those things that still didn’t feel real until we got there. When we arrived in Athens, we checked into our hostel and started getting ready for our walking tour. We hiked up to the Acropolis and followed a guide as she recounted some of the information I’d learned in my course the semester before. One of my favorite things in the whole world is the feeling I get when I’m standing in front of a work of art or architecture that I’ve studied before. I love knowing details that not everyone knows and being able to wholeheartedly appreciate the masterpieces these works truly are. 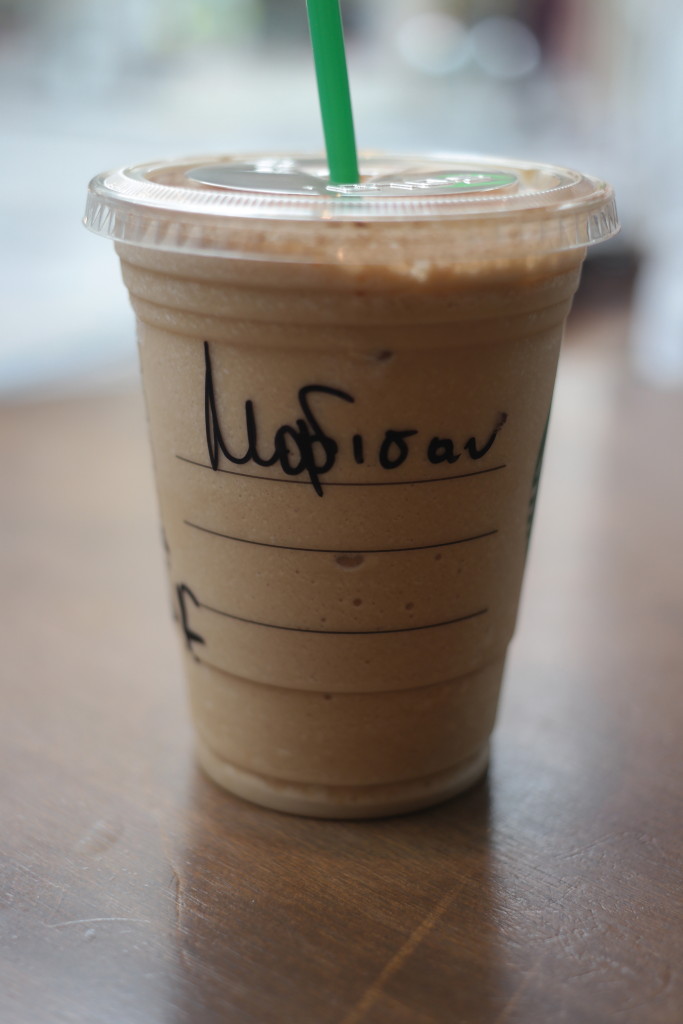 After exploring the Acropolis, we headed back down to the main square for some lunch and shopping. As we were coming down the hill, I saw a magical green sign in the distance signifying that there was a Starbucks!!!!! No matter what anyone else thinks, I pride myself on my Starbucks Gold Member status. But up til this point, it had been almost six months since I’d indulged in an overpriced drink from Starbucks. Over the summer I was an intern at the Cape Cod Museum of Art, and those of you who’ve spent any time on the Cape know the monopoly Dunkin’ Donuts has over the coffee there. So, I rushed over to the Starbucks and quickly sipped [read: gulped] an iced chai tea latte as I explored the main square. Soon, I found myself standing in front of a gyro stand ordering a chicken gyro with extra tzatziki sauce and no onions. I have to admit that chai tea and gyro were not a match made in heaven, but how could I pass up either one?

As I looked around the main square, I found a small leather shop with handmade shoes. Naturally, I had to go in. I tried on three or four pairs of the beautiful sandals and finally decided on a pair of rose-gold sandals with leaf details on each side. I call them my Hermés shoes (if you’ve ever seen Disney’s Hercules you’d understand why). After I’d made my purchase, I headed back to the hostel to meet with the tour group for our second tour of the day. 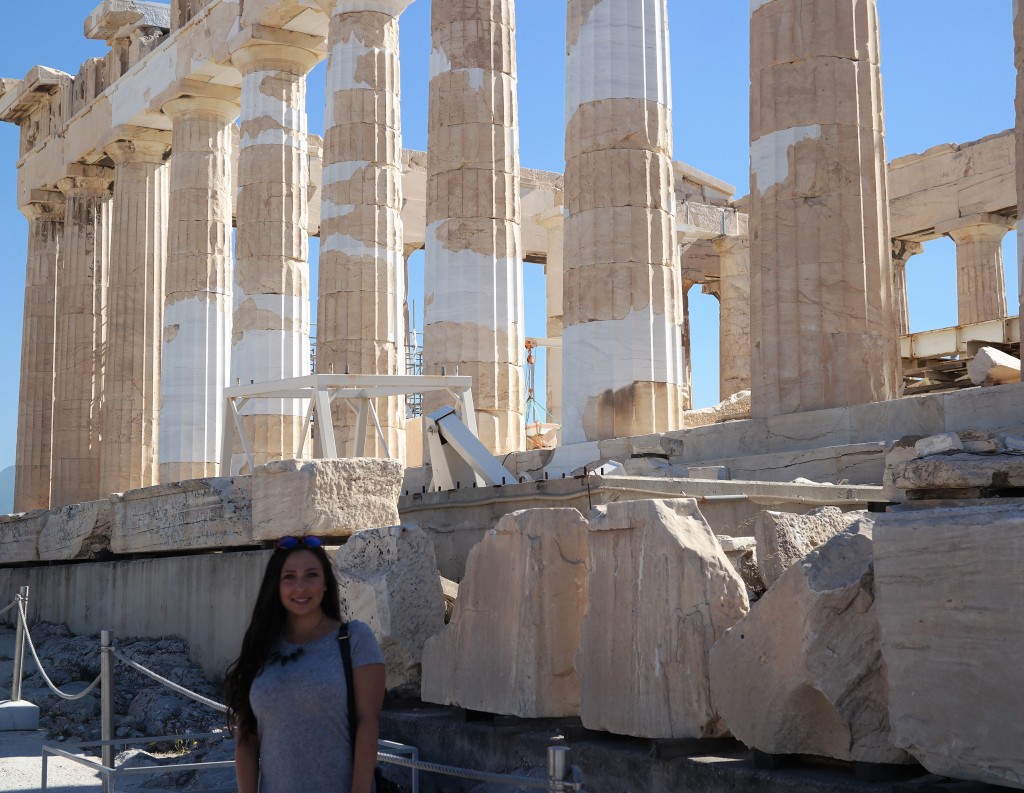 Our first stop was Hadrian’s Arch followed by the ruins of the Temple of Zeus. Though neither were quite as spectacular as the monuments on the Acropolis, it still amazed me how well preserved they were considering their age. After the temple, we headed over to the Olympic Stadium. Next, we followed the tour guide through a gorgeous garden and on the other side we found one of the main government buildings. We were just in time to catch the changing of the guard. According to our guide, the guards have different outfits for different times of year. At this time they were dressed in wool jackets, a skirt/kilt-like bottom, tights, and these outrageous clogs with giant puff-balls on the toes. Their hats resembled pill-box hats, but had long tassels extending out of the top. 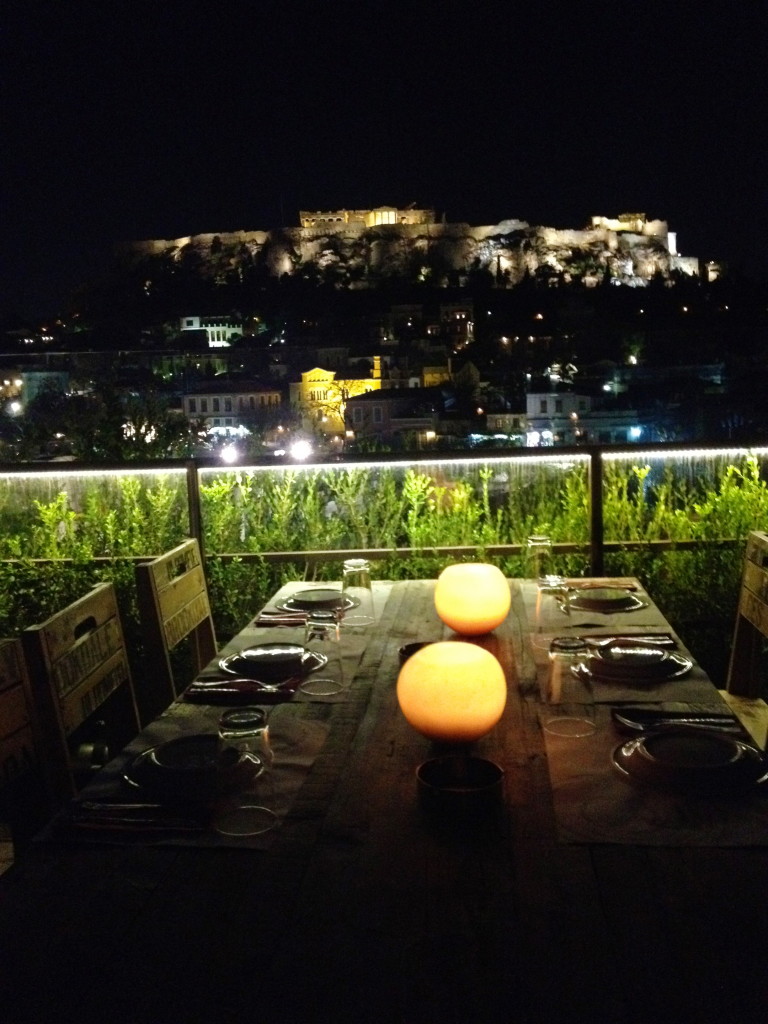 After the tour, we headed to Cocktail Bar 360 for happy hour. The rooftop bar had a breathtaking view of the Acropolis, and the drinks weren’t bad either. I had a drink called “Rose Garden” which was mixed with what they called rose lemonade. After drinks, we stopped for dinner at a small restaurant near our hostel. We were served fresh bread with olive oil, fried feta, Greek-style meatballs, and Greek Salad before our main dishes came out. I ordered Moussaka (you can never have too much Moussaka in your life) and tried my best to finish it. After dinner I felt what I can only assume being 9 months pregnant with a food baby feels like. We decided to attempt to walk it off and explore the square a little bit more. 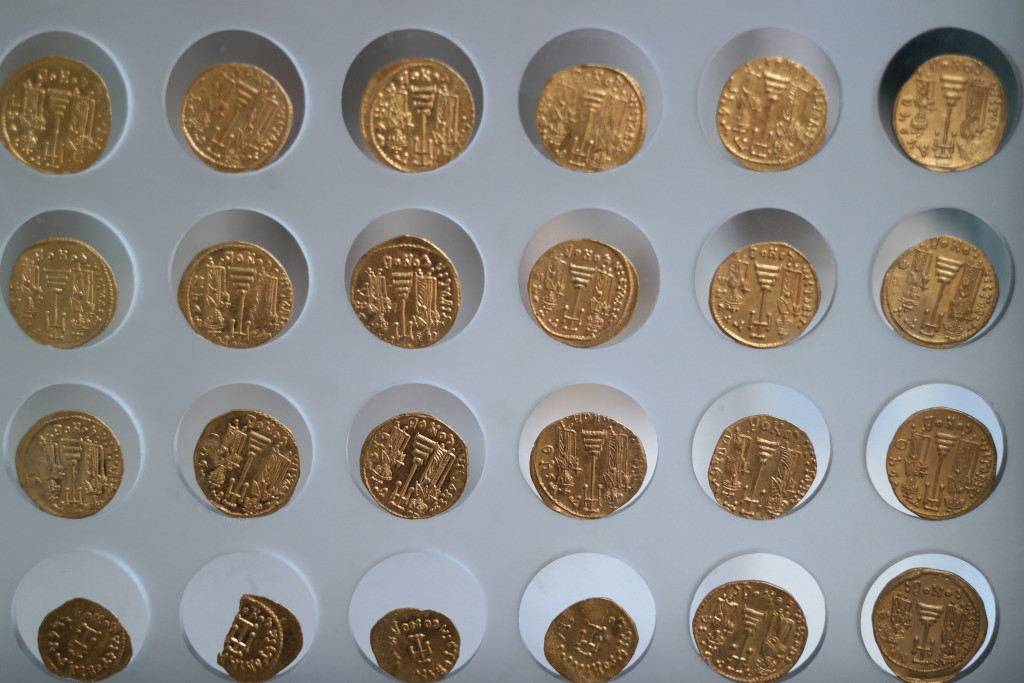 The next day, I woke up early and headed to the Acropolis Museum. Since it had just opened, I was one of the only people in the museum and I was free to explore at my own pace. The first room was full of black-figure vases. I looked at each one, marveling at the detail. I studied the process that was typically used to create the vases in my Art History course and it always fascinated me how each vase was unique and every detail made by hand. Next, I explored the sculptures that had been taken off the Acropolis. Again, I was amazed at the detail in each piece. Every work looked even more beautiful than I had remembered from the lecture screen. 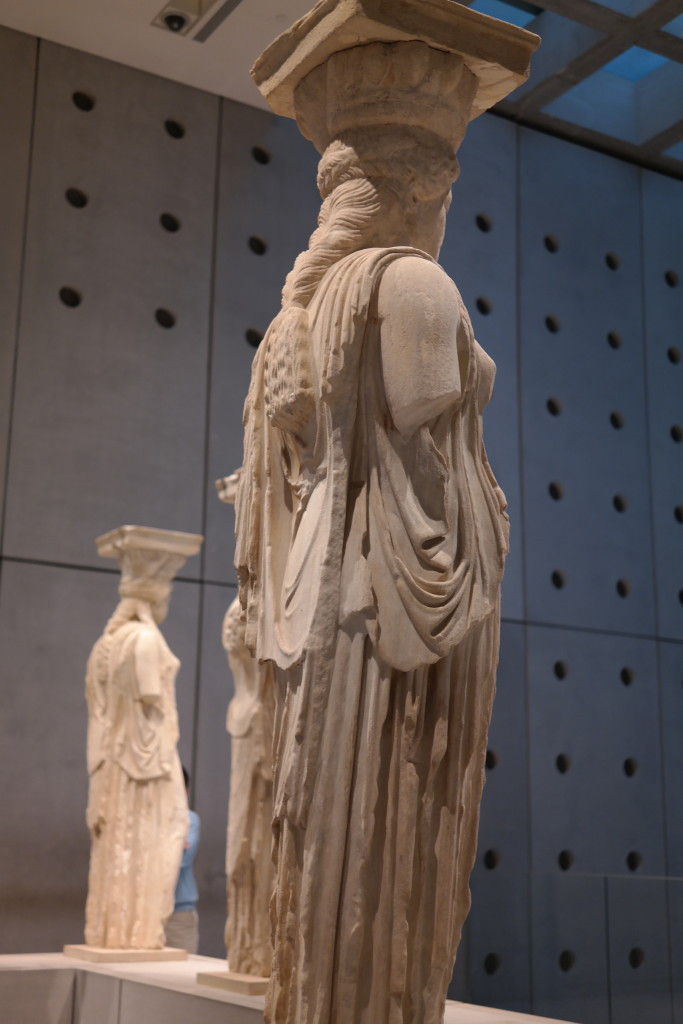 My favorite pieces to view in the museum were the Caryatid figures from the Erechtheion and the Peplos Kore. The Caryatids were so detailed and much larger than I’d imagined. I was amazed by the detail put into every part of each figure. Their stone hair was perfectly sculpted into detailed fishtail braids. Unfortunately, a tour group decided to occupy the Caryatid display short after I’d arrived, so I decided to move on.

The Peplos Kore is one of the best preserved Kore figures in the world. With the naked eye, you can see traces of pigment that once covered this figure. On display next to the original work, the museum presented a reconstruction of what the Kore might have looked like in ancient times. To the right of the reconstruction figure was a TV screen displaying the reconstruction from start to finish. It was truly fascinating.Unfortunately, no cameras were allowed in the part of the museum housing the Kore figure. So you’ll just have to go to the museum and see it for yourself. 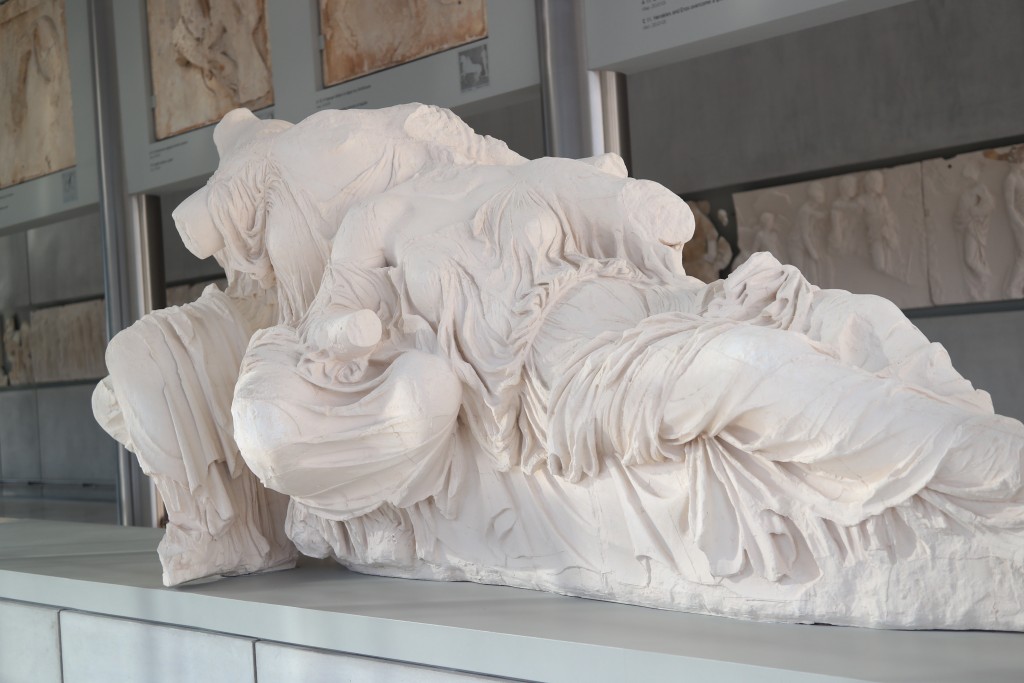 After I left the museum, I headed down to the square for one last Starbucks and some last minute shopping. I’m not sure how true this is, and it seems highly unlikely, but our guide told us that the Starbucks in Greece was the only place you could get a Pumpkin Spice Frappuccino. So I ordered the frap and headed to the gyro stand for one last (amazing) gyro. As I walked back to the hostel, I stopped in a bunch of shops to get last minute souvenirs. Unfortunately, I couldn’t keep my spending to only souvenirs, and bought another pair of handmade sandals and some jewelry along with the presents I got for friends and family.

The shop owners in Greece were all so kind, and many of them wished me a safe trip to Santorini and that one day I’d come back to Athens. The culture is just not like that in America, and that’s something I’ll truly miss. When I finally got pack to the hostel, I packed my bags and headed onto the bus that would take us overnight to Santorini. Athens was one of the best learning experiences I’ve had since I got here, and I am so grateful to have had the chance to visit the monuments I dreamed of viewing in real life in my class last semester.